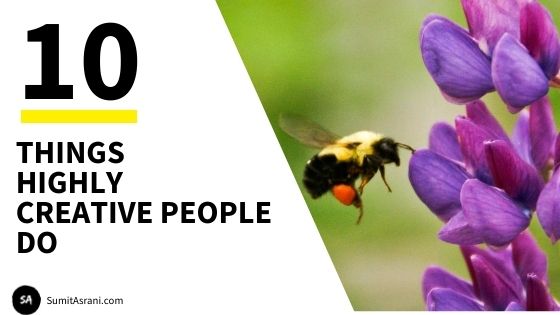 The other day I was taking a walk on the beach, and I saw someone intentionally leaving their footmarks in the sand. However, it didn’t last for long.

The question that stuck in my mind was to know what can be the real passion for anyone?

Perhaps to leave a mark – Essentially, a lasting one.

If one wants to leave a mark, that will last and wants to create something that makes people say – yes!  Then the obvious question is – How?

That is the only question perhaps one wishes to know.

To end up my curiosity. I went back to the Legends, dig out their life works, to understand how did they did it that helped them to leave the mark, a permanent one.

Curious to know what highly creative people do?

If you go to the roots of any creative work done by the legends, the thing that makes their work outstanding, magnificent is that they keep on Doing one thing, and that is – Create, Create, and Create!

Whether it takes hours, days or years – keep creating. There is no boundary. No halt.

They are the work generating machine.

Do not misinterpret this as productivity leads to creativity.

Maybe but not necessarily.

You keep working like a machine. That keeps generating the same thing again, and again it will lead you nowhere. It won’t do much except an increase in the number of the work you produce.

The point here is to create with Creativity.

Srinivasa Ramanujan (Wiki), the name is synonymous with the word Genius in the world of Mathematics. Ramanujan independently compiled 3,900 results in his short 32 years of lifespan without any prior formal training.

Auguste Rodin (Wiki), painter, sculptor started, to begin with, drawings and sketches in his teens and wasn’t recognized until the age of 36 – 40, with his remarkable work – “The Age of Bronze,” and later with an outstanding work – “The Thinker.”

What can help you to create more and more that too without repeating and still standing out? Each time. Every time –

If you are wondering how to create and keep on creating and making a difference then the simple lesson to take from the masters would be to learn to Observe Sharply.

Sharp Observation – The Art Mastered by the Greats!

Take any entrepreneur, author, painter, sculptor, photographer, thought leader, philosopher, mathematicians, musicians, engineers – and if you ask, what is the source (input) of their output – one of the essential skill is Sharp Observation.

Learn this skill and you will thank yourself later.

Moreover, What you do with this skill is more important than having a skill –

Connectivity – making connections between those observed things, your creative work, and experience that will finally give rise to a substantial piece of work.

Observe Nature around you or that of your competitors, clients, or customers, your audience. Anything that you think will aid in your work.In The Art of Scientific Investigating Book,

In The Art of Scientific Investigating Book,

Originality often consists in linking up ideas whose connection was not previously suspected. Professor W. I. B. Beveridge, Cambridge University

The golden rule is, to make connections between two seemingly unrelated concepts to create new ideas, and my upcoming posts will be on this, so stay tuned.

An excellent example would be Sherlock, does it ring a bell?

Wait a sec; I said, Willing to fail. Not, want to fail.

Yes, I know, nobody wants to fail.

The difference is that creative people know, “Failure is always temporary” and so, even after the setback, they get up and move forward.

Creative people take failure on their face, fall right on their head and still pick themselves up on their endeavour to succeed.

You have read about failures and success, since childhood about Sir James Dyson (The inventor of Vacuum), Walt Disney, Michael Jordan, Ian Fleming, Spielberg, Rowling, Darwin,…..

You will not believe in the life events of this legend; He started his career as a painter at the age of 27, and during his ten years of work life that consisted of 900 paintings and other numerous work, he ended up selling only one painting in his entire life.

He did not stop working even when nobody valued his work (At present his paintings are worth billion dollars!)

And apart from that, His painting – Starry Night is under a scientific study to understand the nature of Fluid Flow – Turbulence.

The point over here is that the list is endless, but it is all about, – “How to Fail at Almost Everything and Still Win Big” – Scott Adams. (Amazon).

Being alone gives you time and the freedom to think on vague, controversial ideas, and observe sharply, with deeper meaning and sense rather than accepting it superficially.

Walking alone have turned out to be a great benefit From Beethoven, Goethe, Dickens, Darwin To Steve Jobs.

Being comfortable is exactly the opposite of being creative. If you are comfortable, you definitely won’t look for a change.

Change is a word that everyone is somewhere afraid of and reluctant to do so even if its meant for the good.

However, change is necessary.

They do not settle, at least not for their work. Never satisfied with the work, creative people are always on the move for the next thing or improvement, either way pushing themselves beyond comfort.

#6. They Work with a Laser-Sharp FOCUS

Nothing significant has ever achieved without FOCUS.

Some may argue that creative people keep so-called 100 tabs open in their browser. True. Possibly.

Even if they are multitasking their focus, the Focus that I’m talking about here is not only on the surface but rather deep down.

Where the process of  Thinking is at the subconscious level, too.

They sleep on it.

Cannot emphasize this more but would like to share one quick example, just to show the impact of concentration –

Dream Leads to Nobel Prize, Otto Loewi, for the theory of chemical transmission of the nervous impulse and led to a Nobel Prize!

For years, he had dreams, According to him,

The night before Easter Sunday of that year I awoke, turned on the light, and jotted down a few notes on a tiny slip of paper. Then I fell asleep again. It occurred to me at 6 o’clock in the morning that during the night I had written down something most important, but I was unable to decipher the scrawl. The next night, at 3 o’clock, the idea returned. It was the design of an experiment to determine whether or not the hypothesis of chemical transmission that I had uttered 17 years ago was correct. I got up immediately, went to the laboratory, and performed a single experiment on a frog’s heart according to the nocturnal design. Otto Loewi, Resources: The War of the Soups and the Sparks

Ever heard of Kekule, and his dream on Benzene Structure,

I was sitting writing on my textbook, but the work did not progress; my thoughts were elsewhere. I turned my chair to the fire and dozed. Again the atoms were gambolling before my eyes. This time, the smaller groups kept modestly in the background. My mental eye, rendered more acute by the repeated visions of the kind, could now distinguish larger structures of manifold conformation; long rows sometimes more closely fitted together all twining and twisting in snake-like motion. But look! What was that? One of the snakes had seized hold of its own tail, and the form whirled mockingly before my eyes. As if by a flash of lightning I awoke; and this time also I spent the rest of the night in working out the consequences of the hypothesis.Kekule

The snake seizing its tail gave Kekulé the circular structure idea he needed to solve the Benzene problem.

That is the Focus I’m talking about here. A lot more on this, soon, as this is an essential ingredient.

#7. They Channelize Feelings and Emotions

Moreover, Fear may numb us. But, one has to channelize.

Creators are afraid too, but they do not allow that feeling to take over their creative power; Instead they use it for their creation.

They do not get numb. Instead highly creative people numb their emotions, feelings of being afraid. I wish I had that syringe of anesthesia to numb my feeling of being nervous when putting this out into the world for judgment.

It is all about Mindset.

#8. Take Responsibility with No Excuse

Somewhere we love giving reasons, its only human.

Take Action. Don’t Give An Excuse. Remember we all are descendants of the fittest.

Creative people know that excuses have never created anything, except, creating an illusion of being busy in mind.

#9. They Stand up for their Ideas and Vision

Stand for your work. Stand up for Oneself. It’s tough, but it’s the key to individuality.

Don’t be the output of other’s opinion and decision.

Remember the scene from ‘Whiplash’ – The car crash, no one can forget that scene. The blood, the passion, quickness, the dream, the pursuit of being great, and standing up for oneself.

Neiman did not give any excuse even after the accident, though, he could have given, but he did not; Instead, he took action, he stood up for himself.

No Excuses, No Mediocrity, in creating your masterpiece. The world is waiting for you, your work.

Oh Yes, How can you forget Homer H. Hickam, Jr. (Wiki), a real story about standing up for dreams, ideas and making it a reality, you can watch October Sky.

Moreover, of course taking a stand against Ford company for the invention of an intermittent windshield wiper did make a difference to the original inventor of it – Robert Kearns (Wiki), must watch, Flash of a Genius.

Of all the things – They do one thing –

“Taking a new step, uttering a new word is what people fear most.”
– Fyodor Dostoyevsky, Crime and Punishment

“I say let the world go to hell, but I should always have my tea.”

Join the conversation by adding your valuable thoughts in the comments.

Hey, I'm Sumit Asrani. I write about Creativism—the path to creativity, the way of creative people, craftsmanship, and how to reinvent yourself to create better. Join me on this journey to become the creative bee.

Design a creative life.
Be the Creative Bee.

Here I share my journey and experiences with you - Get Blog Updates in your inbox.