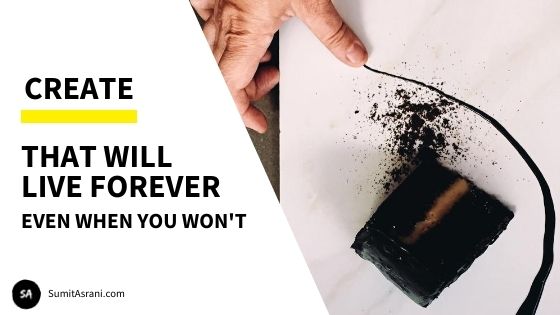 You are here: Home / Creativity / How to create that will live forever even when you won’t?
We all die. The goal isn’t to live forever; the goal is to create something that will. can you Chuck Palahniuk, Diary

Do you wonder how to create something that will live forever even when you won’t?

Do you wonder you can do to give it a lasting effect?

Imagine if you created something that set out as a benchmark for future work in your niche.

You’d think it would be impossible, but it is not. You just have to be a little edgy…

I’m not talking about trends that will come and go. Like seasons that come and go on round the year.

To create that would stand out as an epitome. Something that will last even when you won’t.

Not everything that you create will last. But that’s not what you want. You do wish to leave a permanent mark.

And then you want historical researchers to dig into your works. Curiously. Endlessly. To know How you did i

How to create that will live forever even when you won’t?

One has to be like a Sculptor. Carve stone to manifest the greatness that’s already there. Give shapes to a shapeless stone. Unveil the mystery and truth behind it. Forsee the things that no one can until you show it to the world.

It is all about – Finding the truth in Paradoxical things and condition. It’s not always black or white; the hidden reality may lie in a grey area.

Today, all physicists know from studying Einstein and Bohr that sometimes an idea which looks completely paradoxical at first, if analyzed to completion in all detail and experimental situations, may, in fact, not be paradoxical. Richard P. Feynman Quotes

Before Einstien’s discovery and famous equation E=MC^2, the belief was that Mass and Energy are absolute and are not interconvertible.

When this controversial truth was put together Nuclear physics, energy came into the picture.

What about – A phone without a button?

The world would be nothing without a Motor and Generator. Imagine the world without cars, fans, powerhouse…

Moreover, Robots? The future, perhaps. What made this happen? Thanks to Faraday….

Thanks to Faraday, drum roll, please. For his insight and experiment holding different truth together – Electricity and Magnetism.

Also, putting in front of the world the fact that both electricity and magnetism affect each other.

That gave the world what we now know today as Motor and Generator.

Leonardo da Vinci made a relation between onion and brain.

How about High Tide and Low Tide dependency on the combined effect of Sun, a Moon and Rotation of the Earth?

Yep, Archimedes, and his famous bath story of discovering, which is now known as Archimedes Principle. His bath and the discovery were totally non-resembling until he realized it is not.

Here’s What Aristotle have to say:

The greatest thing by far is to be a master of metaphor. It is the one thing that cannot learned; it is also a sign of genius since a good metaphor implies an eye for resemblance.Aristotle

Hey, I'm Sumit Asrani. I write about Creativism—the path to creativity, the way of creative people, craftsmanship, and how to reinvent yourself to create better. Join me on this journey to become the creative bee.

Design a creative life.
Be the Creative Bee.

Here I share my journey and experiences with you - Get Blog Updates in your inbox.